The Water Department reads analog meters at each customer’s residence every month. This is a critical step in tracking and accurately billing for water that is used. Meters are read every 30-32 days, so your reading will not be calculated based on the calendar month. Readings usually occur between the 15th-18th of the month.

This number represents a starting point. At the end of the month, read the meter again. Subtract 665,530 from the end-of-the-month reading to find out how many gallons were used during the month.

The meter has a sweep hand and the numbers 0-9 arranged clockwise around the face, as shown in the illustration. One revolution of the sweep hand represents 10 gallons of water used. 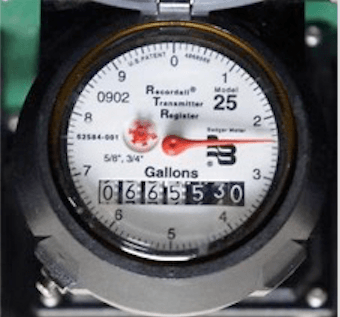 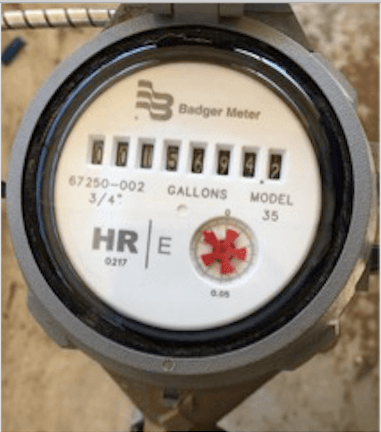 Our newest meters do not have a sweep hand and show a decimal mark before the last number. This is reading the gallons to the tenth degree. Just like the Recordall meter, the HR/E meters have a set of numbers similar to the odometer in your car, and the numbers spin as you use water. However, when reading the HR/E meters, the meter reader discards the last three numbers (removing the tenth). So, using the HR/E example photo the reading would be shown as 157 on your bill which represent 15,700 gallons (rounded to the nearest 100).

Both meters have a leak indicator. This indicator may be a red triangle, red gear, or a two-color wheel in the center of the meter face. To determine a leak, turn off all water. If the indicator is moving, water is going through the meter, which means that a leak is possible. If this is the case we recommend you call a plumber to assist in finding the leak.  The City provides one leak adjustment a year for the highest consumption month during the time the leak occurred.

For questions or concerns regarding meter readings, call the Public Works Department, 817-491-6099.

For questions or concerns regarding billing, call the Utility Billing Department, 817-491-2411.