Phase 1
The City of Roanoke retained Gateway Planning Group for a comprehensive long-term redevelopment plan for the downtown area. Phase 1, presented in June of 2004, consisted of a vision for redevelopment for Roanoke including architectural renderings and photographic representations of appropriate architectural styles. 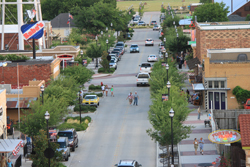 Phase 2
Phase 2 included extensive surveying to allow for the development of an overlay district, specific ordinances for this district, and the 2007 renovation completion of the Rock Building, originally built in 1886. This stately building, the cornerstone of downtown Roanoke, was originally the Silver Spur Saloon.

Downtown Roanoke was listed on the National Register of Historic Places in 2007.